Can Eating Yogurt and Fiber Reduce the Risk of Lung Cancer? 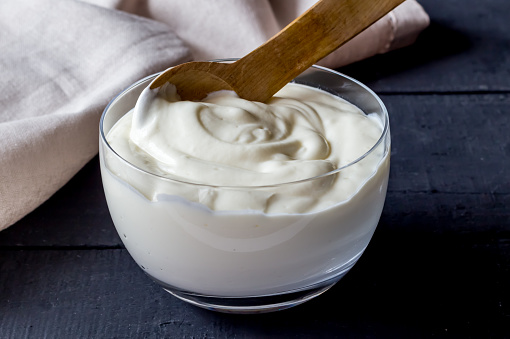 Consuming more dietary fiber and yogurt may reduce the risk of lung cancer, according to a study recently published in JAMA Oncology.

“Dietary fiber (the main source of prebiotics) and yogurt (a probiotic food) confer various health benefits via modulating the gut microbiota and metabolic pathways,” the research authors wrote in their abstract. “However, their associations with lung cancer risk have not been well investigated.”

In this pooled analysis study, which included 10 prospective cohorts, researchers analyzed 627,988 men (mean age, approximately 58), and 817,862 women (mean age, approximately 55). The study was conducted in the United States, Europe, and Asia with data analyses were performed between November 2017 and February 2019. The researchers utilized Cox regression, pooled random-effects meta-analysis, hazard ratios and 95% confidence intervals to measure for lung cancer risk associated with dietary fiber and yogurt consumption. The key endpoint was specified as incidence of lung cancer, subclassified by histologic type. Any participant who had a history of cancer at the time of enrollment or developed any cancer, died, or were lost to follow-up within two years after enrollment were excluded from study analysis.

During an average follow-up of 8.6 years, the results showed 18,822 incident lung cancer cases were documented with both fiber and yogurt consumption associated with a decreased risk of lung cancer risk after adjustment for status and pack-years of smoking and other lung cancer risk factors: hazard ratio, 0.83 (95% CI, 0.76 to 0.91) for the highest vs lowest quintile of fiber intake; and hazard ratio, 0.81 (95% CI, 0.76-0.87) for high vs no yogurt consumption.

Moreover, the researchers observed that fiber or yogurt associations with lung cancer were significant in people who never smoked and were consistently observed across sex, race/ethnicity, and tumor histologic type. Overall, when considered jointly, high yogurt consumption with the highest quintile of fiber intake showed more than 30% reduced risk of lung cancer than non-yogurt consumption with the lowest quintile of fiber intake (hazard ratio, 0.67 [95% CI, 0.61 to 0.73] in total study populations; hazard ratio 0.69 [95% CI, 0.54 to 0.89] in never smokers).