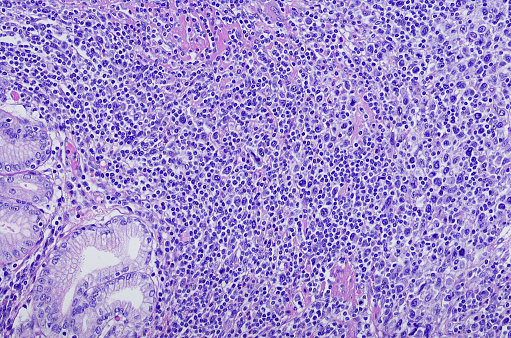 The chimeric antigen receptor (CAR) T-cell therapy lisocabtagene maraleucel (liso-cel) significantly improved event-free survival (EFS) compared with standard of care in patients with large B-cell lymphoma (LBCL) that was refractory to or relapsed within 12 months of first-line therapy, according to results from the TRANSFORM study. Study authors reported that the data showed a clinically meaningful benefit and support liso-cel as a potential new standard second-line treatment for patients with relapsed/refractory LBCL.
Researchers shared results from a prespecified interim analysis of TRANSFORM, a global, randomized, phase III trial evaluating standard care versus liso-cel, an autologous CD19-directed, defined composition, 4-1BB CAR T-cell product administered at equal target doses of CD8+ and CD4+ CAR T cells.
The trial enrolled 184 transplant-eligible patients aged 75 years or younger with LBCL that was refractory or relapsed within 12 months after first-line therapy were randomly assigned to two treatment arms. In arm A, patients were assigned to receive three cycles of chemotherapy. Responding patients were to proceed to BEAM chemotherapy plus autologous hematopoietic cell transplantation. In arm B, patients were to undergo lymphodepletion with fludarabine/cyclophosphamide followed by liso-cel.
Patients in arm A were allowed to crossover to receive liso-cel was allowed if they did not achieve complete (CR) or partial response after three cycles of chemotherapy, were not in complete response after transplant, or demonstrated disease progression at any time.
Median EFS, progression-free survival (PFS), and CR were all significantly improved with liso-cel in arm B compared with arm A, the authors reported. The median EFS was 2.3 months for arm A compared with 10.1 months for arm B (hazard ratio [HR] = 0.349; p < 0.0001). Median PFS was almost three times as long in arm B as compared with arm A (14.8 vs. 5.7 months; HR = 0.406; p = 0.0001). In addition, 39% of patients in arm A achieved CR compared with 66% in arm B (p < 0.0001).
Overall survival data were immature at the time of the interim analysis, the researchers noted. However, there was a numerical trend favoring arm B (HR = 0.509; p = 0.0257).
Safety of liso-cel was consistent with that seen in the third-line or later setting, and no new safety concerns were identified. Cytokine release syndrome (CRS) was reported in 49% of patients in arm B; grade 1 CRS occurred in 37% of patients and grade 2 in 11% of patients. One patient had grade 3 CRS. The most common adverse events in both arms were cytopenias, and prolonged cytopenias were reported in 43% of patients in arm B.