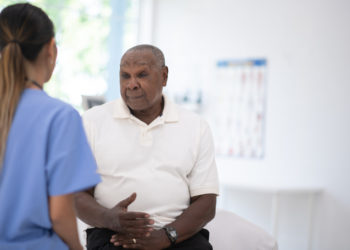 For treatment-naïve patients with chronic lymphocytic leukemia (CLL) or small lymphocytic lymphoma (SLL) and the high-risk genomic abnormality del17p, the combination of zanubrutinib and venetoclax was well-tolerated and led to a 97% response rate. This is according to preliminary data from a nonrandomized arm of the SEQUOIA trial, presented at the 2021 annual meeting of the American Society of Hematology.
Lead author Alessandra Tedeschi, MD, from the ASST Grande Ospedale Metropolitano Niguarda in Milan, Italy, reported that no new safety concerns were identified, and no tumor lysis syndrome (TLS) events occurred among the cohort’s patients during a median follow-up of 9.7 months.
Thirty-five patients were enrolled and treated with zanubrutinib (160 mg twice a day) for three months followed by a combination of zanubrutinib and venetoclax (400 mg once a day after a ramp-up cycle) for 12 to 24 cycles. Treatment continued until patients experienced progressive disease (PD), unacceptable toxicity, or undetectable measurable residual disease (MRD). CLL and SLL responses were assessed by an investigator, and bone marrow exams were required to confirm a suspected complete response (CR).
Among the cohort, 94.3% had CLL and high-risk characteristics including Binet stage C, bulky disease ?5 cm, unmutated immunoglobulin heavy chain variable locus, elevated ?2-microglobulin, and a median del17p frequency of 81.5%.
At data cutoff, adverse events (AEs) were reported in 33 patients, four of which were serious AEs. The most commonly reported AEs included diarrhea, neutropenia, fatigue, nausea, and petechiae. Thirteen patients had grade ?3 AEs, most frequently neutropenia (n = 4) and diarrhea (n = 2). No TLS AEs were reported, despite medium- and high-risk TLS categorizations in 22 and 12 patients at baseline, respectively.
The overall response rate was 96.8% (n = 30/31) among the patients who reached the initial efficacy assessment at three months post-zanubrutinib initiation. The only non-responding patient reported progressive disease (PD) after having an initial partial response while on combination therapy.
The safety data from the ongoing study supports that the zanubrutinib and venetoclax combination was generally well tolerated, even in the high-risk patient population. Dr. Tedeschi noted that enrollment in the SEQUOIA trial is ongoing.