Women With SCD Are at High Risk of Pregnancy Complications 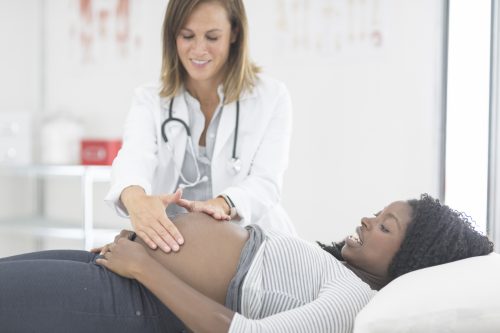 In a retrospective study presented at the 2021 ASH Annual Meeting, researchers described the outcomes for pregnant women with SCD, who are considered at high risk for obstetrical and SCD-related complications throughout pregnancy.
The researchers pulled data for this retrospective analysis from California’s patient dataset from 1991 to 2016, identifying females with SCD who were either evaluated in the emergency department (ED) or hospitalized between the ages of 10-45 years. “Given the dearth of recent population-based studies on female reproductive health in SCD, we used hospitalization data from the socioeconomically diverse state of California to describe peripartum outcomes in women with SCD,” the authors explained.
Researchers used ICD-9/10-CM codes to identify all deliveries and categorized pregnancy outcomes as either incomplete (hydatidiform mole, elective termination, miscarriage, and ectopic pregnancies) or delivery (live or stillbirths). Relevant demographics included race (Black or non-Black), delivery age, mode (C-section vs. vaginal), outcome (live vs. stillbirth), median length of stay (LOS), and maternal mortality for the first in-hospital delivery.
SCD severity was defined as frequency of utilization; severe disease required an average of three or more hospitalizations and/or ED visits per year, while less severe disease required an annual rate of less than 3 acute care visits.
The cohort comprised 3,089 females with SCD of childbearing age, 1,108 of whom (35.9%) had at least one pregnancy. A total of 591 of these patients (53.3%) had severe SCD. The researchers observed 2,330 pregnancies in this population, 1,864 of which (80%) led to deliveries. Forty-five percent of deliveries occurred via C-section.

They noted that women with SCD delivered at ages younger than the U.S. national mean of 26.8 years (all races) and 24.9 years (Black), based on 2017 maternal health data from the Centers for Disease Control and Prevention. “We attribute this age difference to the higher proportion of first deliveries in adolescents with SCD, coupled with the trend towards older age of first delivery in the general population,” the authors wrote.

The median LOS was four days in the women who had first deliveries (5 days for C-section and 3 days for those who delivered vaginally). Twenty-two of the first deliveries (2.4%) were stillbirth, for a rate of 24.9 stillbirths per 1,000 deliveries. This number surpassed the 2014 national rates of 5.9 (all races) and 10.3 (Black) stillbirths per 1,000 deliveries. Of the 862 live births, five women died, which resulted in an inpatient maternal mortality rate of 580.1 per 100,000 live births. The researchers said that this number “far exceeds” the U.S. maternal mortality rates of 17.3 (all races) and 41.7 (Black) deaths per 100,000 live births.