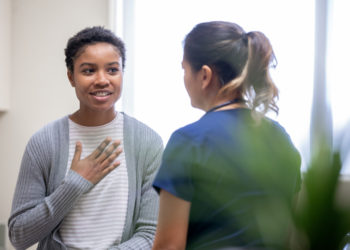 MCL Younger is a randomized phase III trial of first-line treatment for stage II-IV MCL in patients aged younger than 66 years who are considered eligible for ASCT. Patients were assigned to one of two treatment arms with varying pre-transplant conditioning regimens:

In the initial analysis of MCL Younger, five-year time to treatment failure (TTF) was significantly greater in the cytarabine conditioning arm than the control arm (65% vs. 40%; p = 0.038). At the 2021 ASH Annual Meeting, lead author Olivier Hermine, MD, PhD, from the University of Paris in France, shared long-term follow-up data from a median follow-up of 11 years.

“With an additional five years of median follow-up, our results on first-line treatment of MCL patients younger than 66 years confirm the previously observed substantially prolonged TTF by the addition of high-dose [cytarabine],” the authors concluded. “In the future, avoidance of total body irradiation and ASCT, as investigated in the TRIANGLE protocol, may reduce secondary malignancies after R-CHOP/R-DHAP. These data suggest that some patients may be functionally cured by optimal first line treatment and may challenge future chemotherapy-free strategies in MCL.”